President of the Court of Accounts, Ala Popescu had a meeting with international experts of the Twinning Project “Support to Parliament of the Republic of Moldova”. 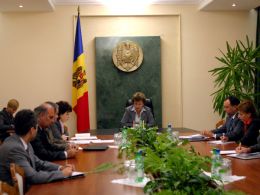 On 16 September 2008, a meeting took place at the Court of Accounts between the CoA President and the experts of the Twining Project “Support to Parliament of the Republic of Moldova”, financed by the European Union, and which is the first twinning project in Moldova.
On the part of the EU, as partner member states, a consortium of two chambers is involved – French Parliament and National Assembly of Hungary. The experts who participated in the meeting were:
Mr. Peter Sardi, Head of International Relations Office, National Assembly of Hungary;
Mr. Miklos Banki, Head of Legal Department, National Assembly of Hungary;
Mr. Daniel Petit, Head of Inter-parliamentary Cooperation Unit, French National Assembly;
Mr. Philippe Bourasse, Deputy Head of International Relations Department, French Senate.
During the meeting, the participants focused on “What are the operating principles of the Court of Accounts and how it fulfills its tasks”.

Ways of cooperation between the Court of Accounts and the Government
Implementation of the Professional Competences Framework, discussed with the CoARM's employees