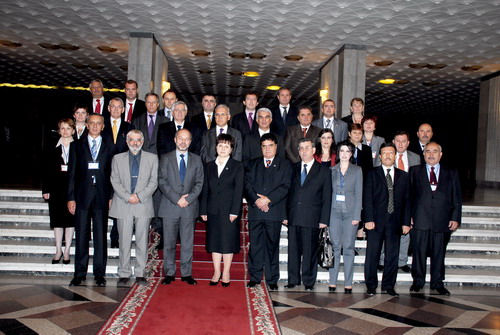 During Moldovan South East European Cooperation Process Chairmanship-in-Office for 2008-2009, with a view to get the SEECP SAIs more actively involved in this process, the Court of Accounts of Moldova and the Ministry of Foreign Affairs and European Integration organized the Meeting of the SEECP Heads of SAIs “South East European SAIs: Developments and Prospects” and the International Conference “Ways to improve SAIs activity within the European vector framework: experience and Practices of the South East European SAIs” at the Republican Palace on 19 September 2008. The reunion and the conference are aimed at establishing, strengthening and sharing information and experience among SEECP SAIs in the field of public external audit, their key objective being the European integration as a foundation for reforms and development of the countries in the region.

Premier Zinaida Greceanni addressed with an opening speech to all the participants, wishing them constructive activity, strengthening of cooperation relations in the field of public external audit between the SEECP SAIs by developing upwards, aspiring to a peaceful, prosperous and united Europe.

The favorable climate during the works of the Meeting and the discussions around the proposed topic at a highly professional level will generate permanent progress in the activity of the SAIs in the region, intensify cooperation and sharing of experience, thus bringing a significant contribution to the advancement and rapid development of our countries, to a South East European region based on European mutually shared standards and values, motivated in the position of a united Europe.

- acknowledge the importance and relevancy of the processes aimed at improving SAIs activity in the context of European integration, appreciating the transformation of the participating SAIs as a remarkable element for the European perspective of the South East Europe countries;

- consider that accession to the EU is a prerequisite for the implementation of institutional and legal reforms in public external audit and financial control;

- SAIs of states participating in the SEECP, which have already become EU Members will play a supporting role in the fulfillment of the commitments related to the implementation of the INTOSAI Standards of Audit, European Guidelines, and other international papers in the field of public external audit;

- encourage cooperation with other highly developed and internationally recognized SAIs from the EU, seeking a shift to a modern audit approach in accordance with the best EU practice, by preserving the context specific for our countries, and which does not deviate from the general principles of the European approaches regarding Public Financial Management and Control.

During the second half of September 19, the Conference “Ways to improve SAIs activity within the European vector framework: experience and Practices of the South East European SAIs” was held in the Conference Room of the Republican Palace with the participation of SEECP SAIs representatives (Albania, Bulgaria, Greece, Moldova, Montenegro, Romania and Turkey).

During the conference, the speakers noted that an efficient external audit over the public financial management is a key to ensuring high standards in the area of public finance management, and this is the fundamental prerogative of good governance, which benefits the citizens of the country, generates economic and social progress of the country and region.

It was observed that SAIs, more than other institutions, should orient their activity through an international perspective, leaving at the same time place for the national specific of each country, and meditate in common on the SAI’s evolutions and prospects.

The participants in the conference were interested in developing of experience, knowledge and good practice sharing among SAIs by bilateral, regional and international (INTOSAI, EUROSAI, etc.) cooperation, stressing that cooperation is a necessity for SAIs. It was noted that SAIs should adjust their audit activity to the new governance conditions, to apply audit methods and standards, to operate efficiently and effectively and be transparent in their activity. They should critically reflect their own actions and be responsible before the Parliament and taxpayers for their own performance and impact in a pro-active manner.

President of the Court of Accounts, Ala Popescu had a meeting with international experts of the Twinning Project “Support to Parliament of the Republic of Moldova”.
Implementation of the Professional Competences Framework, discussed with the CoARM's employees